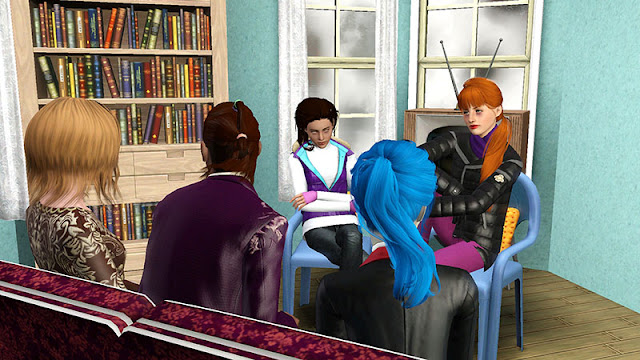 Bellegere and Amaya let the strangers in, but not without some hesitation. In the harsh living room lights, they can see that their visitors are anything but normal. The blind woman, they already know, is different in her own way - but something is off with the man and blue haired girl as well.

It isn't exactly a comforting thought that these people are in their home, but Bellegere is desperate enough to listen to what they have to say. At the very least. 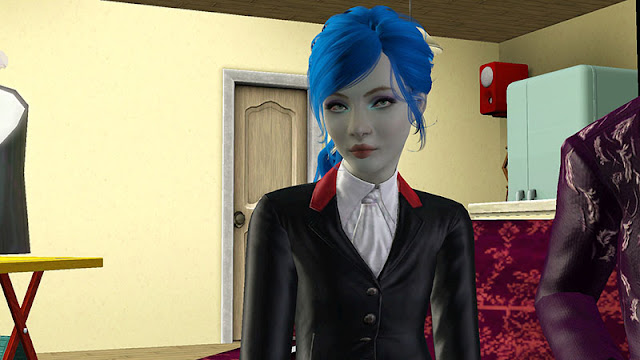 "Maybe we should start with introductions." The girl smiles with a toothy grin at the skeptical Amaya. Her fangs glint faintly off the light. "I'm Adamaris. An old... friend of your family, you might say."

"You can't be much older than seventeen." Amaya counters.

Adamaris shares an amused look with the two sitting beside her before showing off her fangs more clearly, even going so far as to push the pad of her thumb against one of them to draw blood. "I'm a vampire." She says matter-of-factly. "And I've been around long enough to have met some of your long past ancestors." 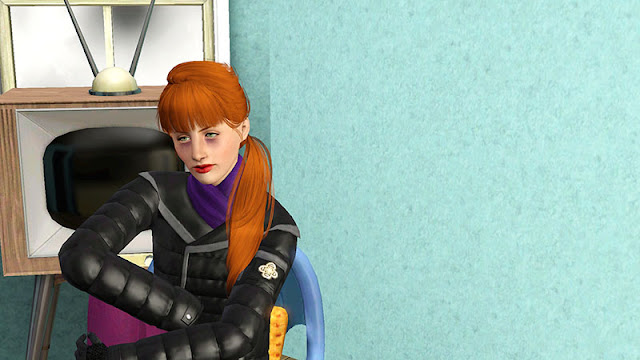 Amaya feels like she's the butt of a joke right now. "You expect us to believe that?"

"I don't expect anything from you, but you know I'm telling the truth." Adamaris purses her lips. "Is it really unbelievable that other supernaturals exist when you yourself are considered one? You both have the gift. You wouldn't be here now, if you didn't." 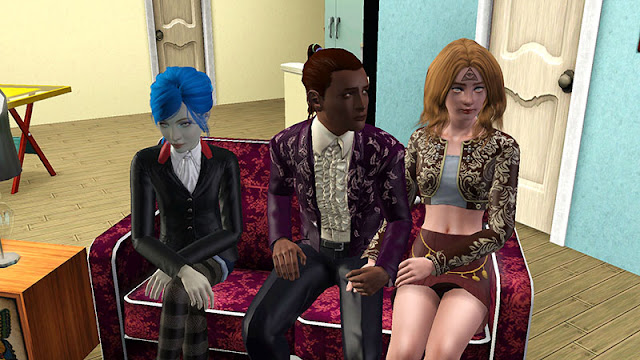 Sensing another argument on the horizon, the blind woman cuts into the conversation. "Let's not get ahead of ourselves. I'm Talya. And this is Elhart." She says, gesturing to the man beside her. "Adamaris and myself are apart of the Council and Elhart here is the lead instructor at the local School of Magi."

"School of Magi?" Bellegere's brows furrow in confusion. "What the hell kind of town is this?"

Elhart smiles. "Not a town. A haven. Moonlight Falls is a commune, one of many, specifically for supernaturals and the descendants of supernaturals. It was made for the protection and preservation of our kind." 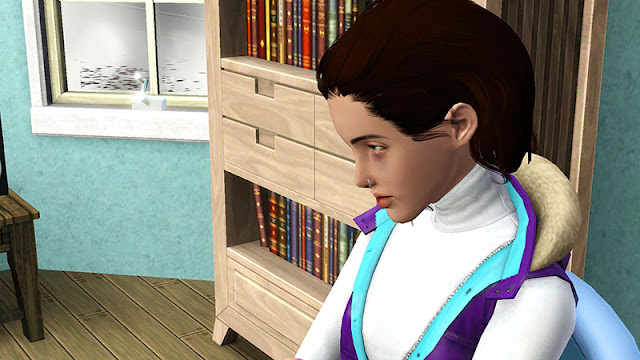 "Protection?" Bellegere may need to get some sleep and soon. As ridiculous as their stories sound, she can't help but believe their sincerity. 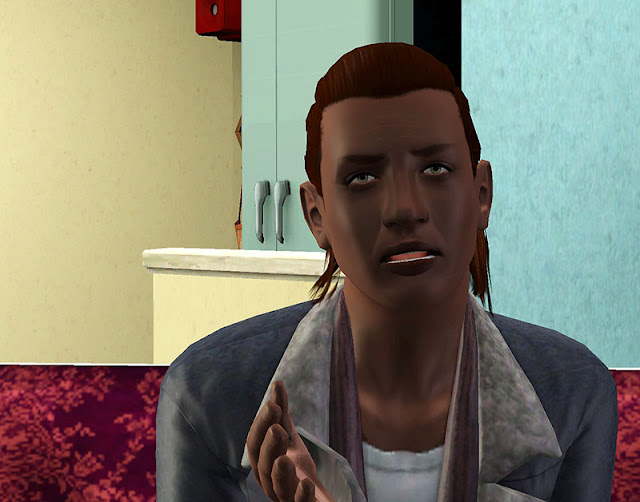 "Moonlight Falls was created just after the end of the Secret War between the vampire clans. When the existence of not only vampires, but the rest of us, was in jeopardy of being exposed to the 'normals,' the varying leaders of our kinds rallied together and created the Unified Council we know today. Communes, like our little home, were founded and supernaturals were advised to move to these locations or run the risk of breaking the new laws that were enacted. It's important that we remain isolated, but you'll learn all about that later." 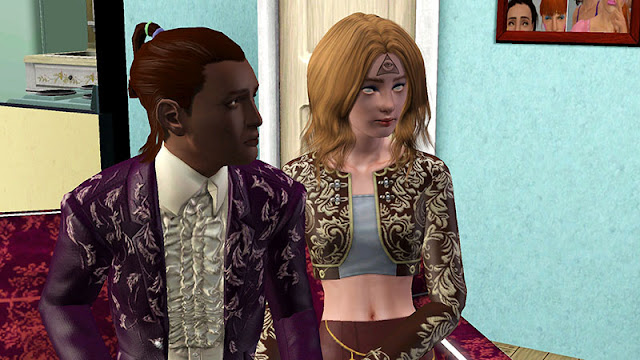 "For now. You'll know all eventually." Talya spares a knowing glance at Amaya who refuses to meet her blank gaze. "The history of Moonlight Falls is not why we're here though. You want to know about yourselves, no?"

Bellegere nods reluctantly. Amaya scoffs, but doesn't say anything to the contrary.

"I can help with that." Talya smiles. "Amaya, you're a seer. Very rare among our kind and something to be cherished. Bellegere, you're a mage. And from what I've seen, a very powerful one. At the request of Elhart, I will not reveal what your focus is. He believes that discovering that part of your power is the most exciting part of being a mage."

Elhart laughs. "It is. Trust me. And when you find out, you'll feel as if you've finally filled a long suffered void." 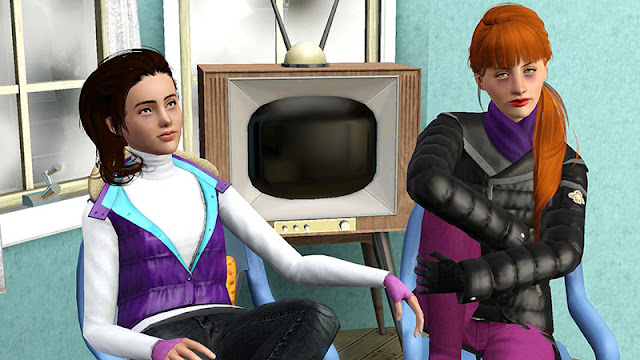 Bellegere smiles warily as she gently tries to convince Amaya not to yell at the only people willing to help them. "Amaya..."

"No. This is bullshit. We haven't been able to sleep in days. We go traipsing around this boring ass town looking for some help and all we get is... this." She gestures in front of her with a glare. "Thanks for the help, guys - but I think we've got it from here."

"No we don't." Bellegere is on the end of her rope and Amaya is only making things worse. She rubs her temples when another wave of pain rocks through her. "We don't have everything under control, Amaya. We never did." She takes a deep breath, waiting for the pain to subside before opening her eyes again. "Can one of you please tell me why this hurts so bad? I don't know if I can take much more of it."

Amaya grabs Bellegere's hand and holds tightly when Elhart steps forward. "May I?" He gestures to Belle's brow and, not entirely sure what he is about to do, she cautiously consents. A heavy green-blue haze emanates from his hands before he gently touches her forehead. His hands are cold, but Bellegere feels instantly calmed as the pain slowly subsides. "You need to let your magic out every once in a while, or else it builds up and causes complications."

"I don't know how to do that." Bellegere frowns.

"You will. Starting as soon as tomorrow, if you wish."

"Okay -" Bellegere turns her attention to a somewhat less skeptical Amaya, "- but I'll only do this if you do it with me." 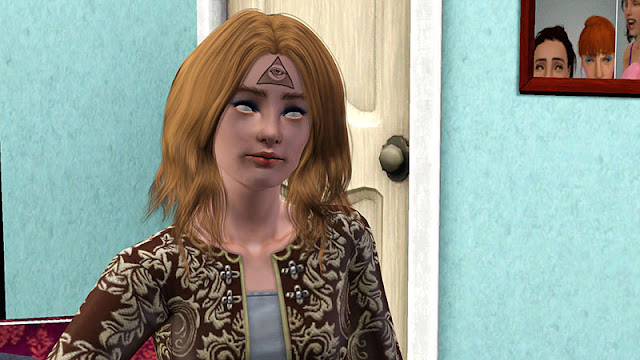 "Your training will be with me, Amaya." Talya adds. "And yours will be significantly more difficult than hers. Our kind are not trained so easily."

Bellegere gives her a pleading look. Amaya squeezes her cousins hand again with a small smile of resignation. "Fine." She relents. "But I still think this is bullshit." 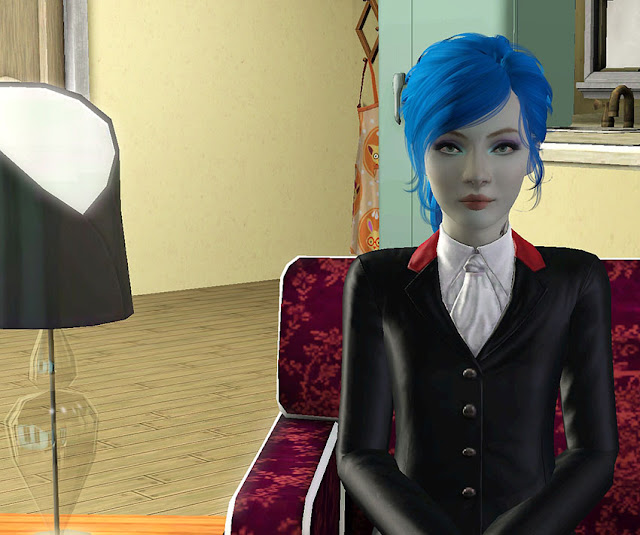 "No you don't." Adamaris raises her hand to stall Amaya's next outburst. "I know this is a lot to process and you both still have questions, but you have plenty of time to get the answers you are seeking in the days to come. You will need a good nights rest for tomorrow's training. I assume you two will come by here to start their lessons?" Talya and Elhart both nod mutely. "Good. Then we should let them sleep."

Amaya and Bellegere exchange a confused look. "We can't sleep though." Bellegere sounds pitiful, but she doesn't care. All she wants is to be able to sleep one full night. Just one. 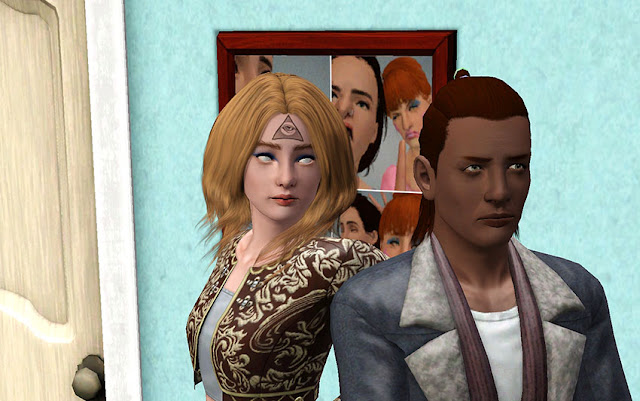 Elhart and Talya, already on their way out, grin sympathetically. "I think you'll find that tonight you can." 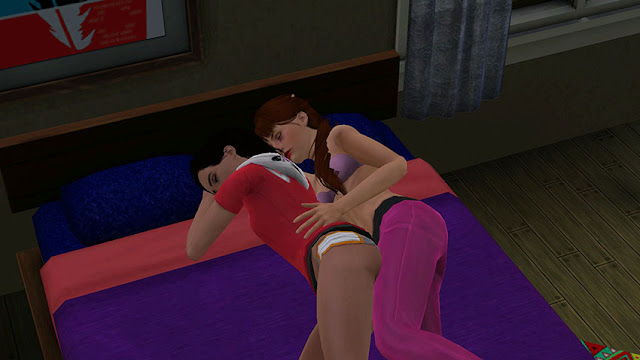 Not entirely convinced by Elhart's assurance, the girls both get into Bellegere's bed in preparation for a long, tumultuous night. Once they get settled, however, they find themselves almost immediately shutting their eyes.

"We forgot to ask the most important question."

"We should have asked Talya what her age reversal secret is, so we can exploit it and make bank. She looks good."

"Heh." Amaya chuckles, stifling her own yawn. "I'll have to remember that one for tomorrow." 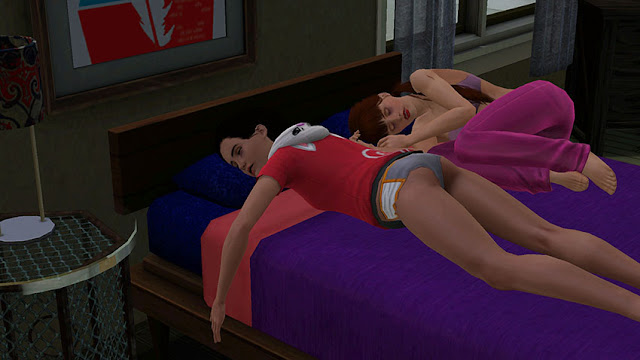 It's not long after that both girls fall into a deep, and thankfully dreamless, slumber.

If anyone is naturally wondering why Amaya and Bellegere didn't notice the weirdness of the citizens in Moonlight Falls prior to now, well... I'm chalking it up to a lack of sleep.  Bellegere had only lived in the town for a couple of weeks before Amaya's visit and mostly spent the brunt of that time in her house or at work - so she wasn't really exposed to anyone outside of those two places. Amaya is naturally suspicious of everyone, so she likely had a few instances where her "strange meter" went off, but figured it was just her being, well... her.

And because a friend of mine brought this question up: Amaya cannot control her ability, at all. She gets glimpses briefly, mostly while asleep, and they are completely random. So the likelihood of foreseeing any of the things in MF (with exception to the old gyspy), is minimal. With training though, she'll be able to hopefully manage and use her power at will. I'm not entirely sure if that's the direction I want to take the story in, but for now that seems possible.

The Downloads page has been updated. :)
Posted by GigaRevival at 1:21 AM

GigaRevival
I spend far too much time playing video games and not enough time doing much of anything else.

This is a Random Legacy Challenge blog that develops a story around the generation goals that have been rolled [although I'll admit that I'm pretty lax with the rules]. The chat thread for the Random Legacy Challenge can be found at MTS. If you haven't already, stop by and introduce yourself!
New to the story? Start at the Prologue.
And for the curious/interested, here is the [infrequently updated] Dean Family Tree.